Today marks the 37th anniversary of the Fall of Saigon, the end of a sad and painful chapter in American history.  The day our country’s legacy as a beacon of freedom which stood tall and mighty against the threats of tyrants came to an end.

April 30, 1975 marked the conclusion of the United States involvement in Vietnam as the last helicopter airlifted from the US Embassy while the North Vietnamese marched into, and took control of Saigon.

The United States was no longer invincible.

Television sets in living rooms all across our country showed the chaos and struggles of the South Vietnamese people trying desperately to board the last remaining helicopters in fear of being left behind.  We saw the desperation and fear on their faces, and in their eyes.

Operation Frequent Wind went down as the largest helicopter evacuation.  More than 1,000 Americans and nearly 6,000 Vietnamese escaped from various locations in Saigon and taken to U.S. aircraft carriers waiting offshore.  More than half the refugees were taken to the USS Midway.

Corporal Charles McMahon, eleven days away from celebrating his 22nd birthday, and 19-year old Lance Corporal Darwin Judge, both U.S. Marines, were killed in a North Vietnamese rocket attack, one day before the Fall of Saigon.  They were the last two servicemen killed in Vietnam.

So on this day, and everyday, remember the sacrifices made by our men and women in uniform, so that we may enjoy the freedoms envied by so many. 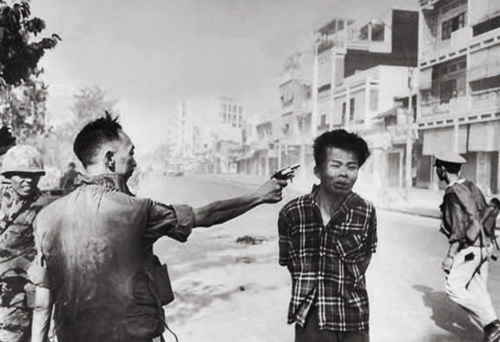 The Vietnam War and the turbulent 60’s left us with lasting images of the evils that exist in this world.  The sobering realization of the darkness that lies deep within each of us.   Photographic images that are engrained in our memory, as a chapter in our history, to make sure we never forget the past.

A reminder that war is hell.  For everyone.