Thanksgiving is more than turkey and dressing.

The holiday is much, much more than a day of giving thanks. 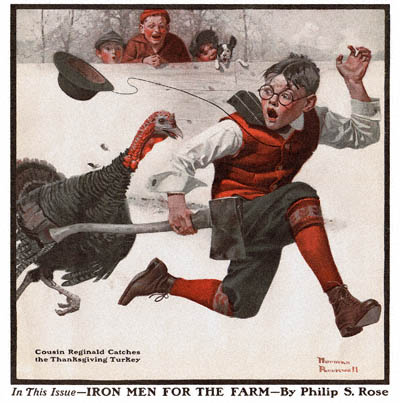 While family gatherings are fun (for a limited time), full stomachs even better, nothing can top a four-day weekend like non-stop football.  The only thing possibly better would be a large flat screen TV with surround sound next to the dinning room table, to keep the chatty mother-in-law tuned out.

Four straight days of college and professional football.  From sun up to well past sun down!  All across the country, men will take control of, and, if necessary, hide the remote.  Hey, enough of the parades, give us the channel switcher.

So here is your ultimate viewing guide for all football lovers.

(All times listed are ET)

#25 Texas @ Texas A&M  This day is usually set aside for traditional college rivalries and three professional games.  I spent many afternoons watching Oklahoma and Nebraska battle it out, but they no longer play each other, which is a shame and travesty for college football traditions.  Instead, for one last year, the featured college game of the day will be the Texas Longhorns traveling to College Station, Texas to take on heated, and hated, rival the Texas A&M Aggies.  Game starts at 7 pm. on ESPN.  This should be a heck of a game to watch.  The Aggies are leaving the conference they have shared for so long with the Longhorns.  The state’s two largest schools will no longer play after this season.  Shame on both schools for acting like two grade school children fighting in the sandbox.  Expect a great deal of hostilities on the field.  Skip the leftovers during this game, anything may happen.

Green Bay Packers @ Detroit Lions  12:30  Fox   The first of three NFL games on Thursday.  For years, we have had to watch the pathetic Lions play on turkey day.  Now, they finally have a talented team, a team many would label as dirty, as they host the defending Super Bowl champs.  Key match up: Lions DT Ndamukong Suh vs. Packer QB Aaron Rogers.

Miami Dolphins @ Dallas Cowboys  4:15  CBS  Since 1966 the Cowboys have played on Thanksgiving day every year but two.  This year finds the Cowboys on a surge, in part thanks to rookie running back DeMarco Murray’s breakout performances.  America’s Team should continue their late season push against a Miami team that lost its first seven games.  NAP ALERT: This game should be a yawner by halftime and may be a good time to take a break.

San Francisco 49ers @ Baltimore Ravens  8:20  NFL Network  Of the three NFL games today, this game gives me the least amount of excitement.  The surprising 49ers lead the NFC West and travel to take on the unpredictable Ravens.  How will 49er quarterback Alex Smith perform against the Ray Lewis led Raven defense.  Fellas, if you have to spend time with the family, or help put the leftovers away, this would be a decent game to show what a congenial family man you are around the house.

There are quite a few college games today, but only two televised games featuring ranked teams.

Iowa @ #21 Nebraska  12 noon  ABC   Nebraska is coming off an embarrassing loss to Michigan.  Iowa and the Cornhuskers are currently tied for third in the Legends division of the conference.  If your football viewing hours are in limbo, forcing you to pick and choose games carefully today, skip this one and lobby for the next.

#3 Arkansas at #1 LSU  2:30  CBS  The top-ranked Tigers vaunted defense will finally face a team with an offense.  National title hopes are on the line in this SEC game.  With three Top 5 teams falling this past weekend, Arkansas is in the middle of national championship discussions.  With a stout defense and home field advantage, don’t look for LSU to fall out of the top spot.

On Sunday, the regular NFL schedule resumes with 12 games followed by the Monday Night Football telecast.

Enjoy the Thanksgiving holidays.  May your refrigerator and cupboards be stocked full, may there be plenty of turkey for left over sandwiches, may you have plenty of cool whip for the pies, and may you enjoy your time spent with family but, please don’t come looking for the remote.